Barcelona has some of the worth looking UNESCO World Heritage Sites that are a must-watch for any kind of traveler. Amongst it, the works of Lluis Domenech I Montaner & Palau de la Musica Catalana, the ravishing architecture of Hospital de Sant Pau, works of Antoni Gaudi, Park Guell, Palau Guell, Casa Mila, Casa Vicens, Sagrada Familia and Casa Batlo are some of the most excellent tourist attractions that one can hardly afford to miss. 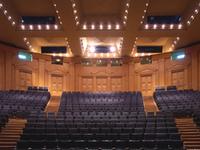 The National theater of Catalonia is the most famous tourist destination of Barcelona city where millions of tourists visit every year. It is known for its beautiful interiors, a complete cozy ambiance where you can just relax & have moments of leisure to enjoy the Catalonian cultural events wholeheartedly.

The majestic structure is divided into 3 parts viz- a small hall, a main auditorium and a stage house that spreads across a very huge area of around 20,000 Sq.mts. The building is surrounded with people across the cafes, restaurants & book stores that lies in the vicinity of the theatre.

Out of the major popular destinations in Barcelona, Passeig de Gracia is a celebrated destination for its rich historical and cultural heritage. During the end of the 19th century and the beginning of the 20th century, it was the residential center of the Catalan bourgeoisie which is today a lively street.

It is illustrious that the modernist movement left a permanent impact on the Passeig de Gracia and even now there are many buildings, which stand testimony to the modernist tenets.

Buildings like Lleo Morera mansion, de Domenech i Montaner, the Batllo house,etc. all of which were designed by Antoni Gaudi, mirror the deep impact of the modernist movement on Passeig de Gracia.

Ciutat Vella, situated between the Mediterranean Sea and the neighborhood called i'Eixample, constitute Les Rambles, Raval and Barri Gotic. It is considered as the centre of the city.

Les Rambles located in the heart of the Ciutat Vella extends from the Plaça Catalunya to the Mediterranean Sea and have different features accordingly.

Besides these, areas like El Mercat de Sant Josep, Teatre del Liceu and Raval that forms another integral part of the Ciutat Vella gives it a local name as the el Barri Xinès, or China town.

Numerous ethnic and stylish restaurants along with cafes make the atmosphere lively.

Stone Mammoth,situated in the Parc de la Ciutadella is another popular attraction of the Barcelona city.

The statue is situated in the vicinity of the lake of the park.

The person behind the Stone Mammoth is known to be the multifaceted Norbert Font i Sague, who is a renowned geologist, speleologist and writer as well.

Basically the idea of creating a statue of the mammoth was conceived by the Junta de Ciències Naturals i.e the Board of Natural Sciences that was finally materialized on the basis of a model by the sculptor Miquel Dalmau.

PortAventura, a theme park in the resort of Portaventura, Tarragona, Catalonia, Spain, on the Costa Daurada has many sections. Being the conception of the Tussauds group (Alton Towers), Anheuser-Busch (Busch Entertainment Corporation) and Universal Studios, it hosts two hotels and a water park.

Being one of the biggest resorts in the south of Europe, it has two airports within 30 minutes reach where a train station also connects it to Barcelona and Salou.

Mediterrania, which is the main entrance area of the park, features two rides. There are quite a few restaurants and shops that give a feel of a classic coastal town in Catalonia. A show featuring fireworks and floats is organized here along with Furious Baco & Boat ride during the mid part of the year. The previous one is the fastest roller coaster in Europe themed along a hay-wire grape collecting machine while the latter one takes visitors from the Mediterrania area to the Chinese area

Universal bought up most shares in the park and renamed it as 'Universal's Port Aventura' where two hotels and a water park were constructed. The place was further renamed as 'Universal Mediteranea'.

It is divided in 5 thematic parts: China, Mexico, Polynesia, Mediterranea and the Far West.

It is the Aquarium of Barcelona and one of the largest in Europe. Here you can see the fauna & flora of the Mediterranean, and part of the marine tropical water where you get beautiful aquatic creatures like fishes, water flowers and animal invertebrates.